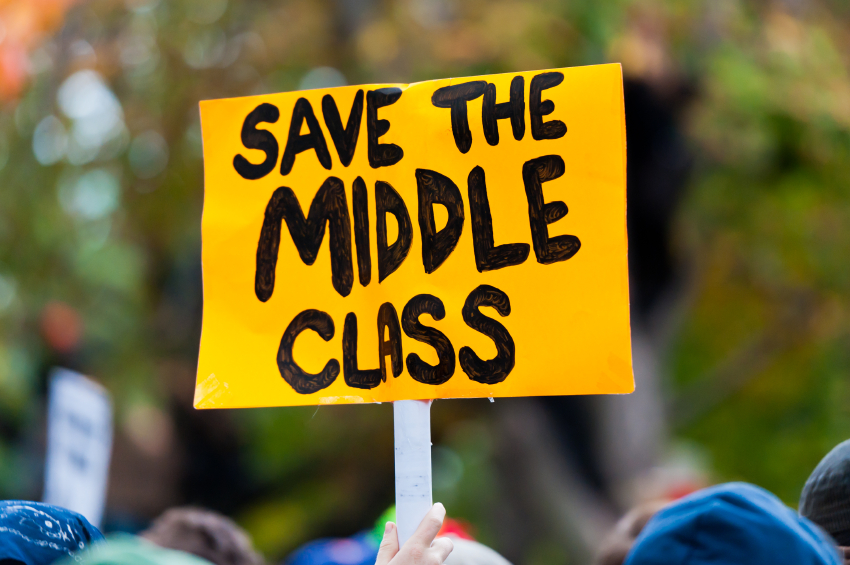 Where have all the middle class Americans gone? This question is quickly becoming a hot topic for 2016 presidential candidates as middle America struggles to keep their heads above water, no longer enjoying any sense of financial stability; and seemingly no life preserver in sight.

The core of the American dream is eroding and the people want to know why. And with the middle-income households having been the foundation of consumer spending in the past, many experts are concerned for social and economic stability in the United States.

“Americans are always kind of reluctant to embrace open class warfare,” said Patrick Egan, a politics professor at New York University. “If more Americans are under the idea of placing themselves at the bottom, you’ll see politicians follow.”

According to a study released this week by the Pew Research Center, the middle class are no longer the majority in adult population. Overall, the study states that various demographic and economic influences are responsible for the change.

Demographic shifts revealed by the study included an increase in low skilled immigrant workers, women in the workforce since the 1970’s, and higher education enrollment. According to Pew, in 2015, only 9% of Americans are in the highest income category, while 20% are in the lowest income category.

The catalyst for the shrinkage has been occurring over the last few years while recovering from the Great Recession as the economy favored both technically-skilled and higher educated workers; along with wealthy investors. In the data provided by the Bureau of Labor Statistics, 72.5% of the working population holds a bachelor’s degree or higher, as of November 2015.

An increase of workers with less education and lower earnings combined with a quickly increasing growth of higher income households caused the percentage of middle class to fall just below 50% of the adult population, found Pew. The non-partisan group found that both higher income and lower income tiers have grown rapidly while the middle tiers declined; all of which are a measure of the growing inequality in the job force. BLS points out that from 1979 to 2014, the highest earners in the 90th percentile have enjoyed a 33% increase in median weekly earnings; while the lowest 10th percentile have actually seen a decrease in their weekly earnings from $383 to $379 per week over the 35 year period.

The report from Pew, using data from the Labor Department, Census Bureau, and the Federal Reserve, defined middle class as “households earning two-thirds to twice the overall median income, after adjusting for household size.”

Other findings in the study add that the middle class has shrank due to a decline in manufacturing, most likely the result of competition from imports as well as the job market favoring the most educated and technically skilled workers.

Aside from the data and study, many Americans are concerned with the ever-rising cost of living, along with the high cost of education should they want to try to improve their chances in an unbalanced job market; considering the middle tiers median weekly pay hasn’t changed much in 35 years, and the lowest tiers have declined in median weekly pay.

Identifying as middle class has been a long-standing American tradition; but the Great Recession and slow economic recovery since have completely changed the image of this heritage. This change will redefine class self-identification and likely be the main focus of economic debate within presidential campaigns for the next year.

While these findings aren’t exactly comforting, the trend depends on how American households evolve in the future, raising minimum wage, reducing the cost of education, and making adjustments for the high cost of living.

Will the pressure to revive the spending class be the motivation for politicians?

All of your money can be affected by economic and social factors. If you have questions, or would like more in-depth information on the decline of the middle class, contact us today to learn more about how can help you create stability and increase the flow of money in your portfolio.